Rather pleased with this Ebay purchase. Costing £11.85 delivered, these naval figures will be very useful. The two Wrens will not be touched (you have my word). But the others will be paint stripped and repainted. Most will be attached to my French 1870-1930 collection.

Four are unusual English-made castings. I assume they represent Royal Navy, but shoulder rifles in the French manner, on their right side. Sometime back Paul Watson sent me one of these figures, and it painted up well as a French seaman, a hat pompom being the only conversion. Three others will be likewise converted to French, to man a ship's gun. The remaining Crescent figure will join my RN fleet.

Well, no need to fork out money trying to get some Starlux 'marin' toy soldiers, this now gives me ten figures manning my two French gunboats. 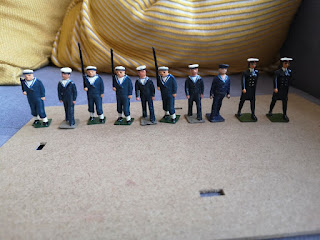 Here are the figures completed, and now serving on my French gunboats. 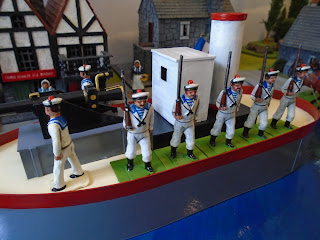 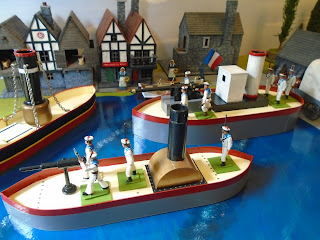 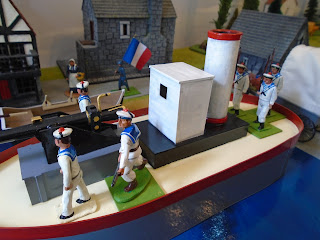 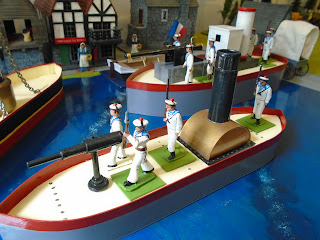 Please note, due to other projects, I'll be reducing my number of blog postings.
MGB
at June 12, 2022 14 comments:

Just completed a second American gunboat. My original plan was to construct ten ships for the Dominion War campaign. However, a shortage of plasticard, combined with a reassessment of what was actually required, allowed me to reduce the number to eight models, with one more constructed for my Soviet WW2 collection. Only thing still to complete are some national flags!

I'm very pleased with their general appearance, and have no doubt they will provide some great scenarios for future games. The miniatures collection in 54mm is also nearing completion, with less than fifty odd figures still to be integrated. So that too is a project largely sorted. 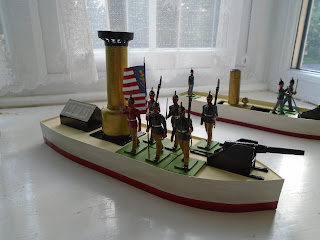 I can't deny, posting on this blog gave me the incentive to complete my projects, a very useful morale boost.

I've now decided its time to reduce my posting on blogs. I want to concentrate my hobby time on condensing numerous shoe boxes full of notes I compiled over twenty-five years ago! Half are on a feature of the American Revolutionary War, the others are on my local volunteers and yeomanry during the French Revolutionary Wars. Both are mainly drawn from Government papers. Completing these projects must take priority; these are my attempts to fully record the exploits of others, A lot of time and resources went into researching both subjects, and they include a great deal of information which has never been published before. It really is time to get my act together and bring the information together.

In conclusion, most of my future wargaming will be just a family affair, lol. Posting here will have to take a backseat.

THE FULL FLEET ON MANOEUVRES (inspired by some similar scenes on Megablitz blog, see links.) 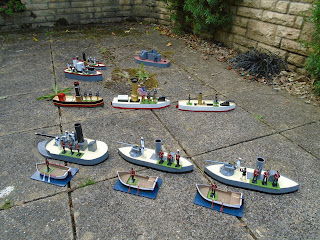 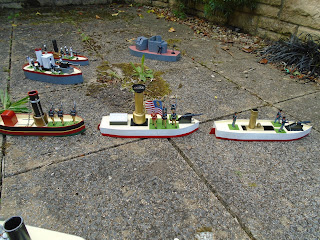 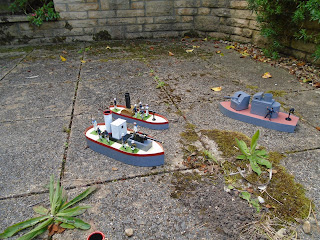 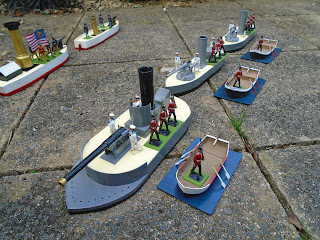 The recent defeat of the French Field Army in Louisiana came as a major shock to the French nation. In response to this setback, the president of France called for a national mobilisation of volunteers, to provide the required manpower to secure their rights in Louisiana. The response was impressive (calculated with Dice). Two new expeditionary armies were organised around the national guard and new volunteers.

A Change of Plan

The French plan of action was to now launch a second front, with a substantial force being directed towards Washington. The remainder would be sent to New Orleans, as reinforcements.It should also be noted, off the west coast of the United States, a not insignificant force had also recently arrived, drawing troops from French far-east possessions, although the French government has made it clear they do not have any claims outside Louisiana and the southern half of Mississippi.

A New 'Heavy' Gunboat for the French. 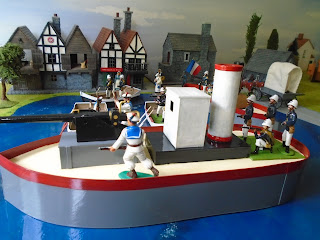 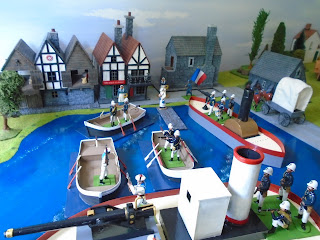 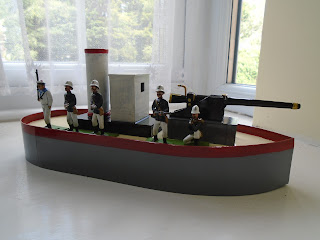 Perhaps inspired by this tin model of the 1890s. 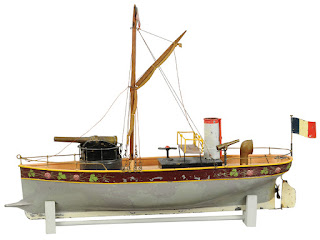