Having just augmented my Governor-General's Horseguards I was keen to use them in a skirmish game. Simple scenario, a D6 would determine who was to suffer an attack on their encampment. A D6 would determine if those in the camp were aware that an enemy force was approaching and had time to prepare. A D6x6 would provide the numbers for each side.

An advanced force of Canadian troops had recently set up their tents and had just consumed their evening rations. It comprised one battalion of volunteer-militia (12), regular riflemen (6), plus the Governor-General's Horse Guards (6, five of whom were now on sentry duty.  Unknown to them, an American patrol had spotted their camp fires and sent word to a determined and energetic cavalry officer, who was now approaching with two regiments of regular cavalry and one more of National Guard cavalry (totalling 12).

The American cavalry approached in two divisions from a single direction (D6 determined). One sentry was in their direct path, a D6 score of four indicated the sentry was taken down but not before he had discharged his rifle. Both divisions now rapidly advanced  but would only reach the encampment on two more moves. In response to the discharged rifle, the Canadian troops behaved (D6, score of six) in a very professional manner, and were formed up and firing in one move! But would they withstand charging cavalry?

The main American force charged the formed up volunteers. Although the first burst of fire from the Canadians had failed to inflict a casualty, being just out of effective fire, their morale held, and their second brought down two cavalrymen. Shaken, the cavalry charge fizzled out. On the Canadian left the riflemen were unable to bring down a single cavalryman but here something strange occurred. In the subsequent melee the Americans threw a pitiful 3,2,6,2 compared to the riflemen's 5,6,3,5. When factors granting the charging cavalry gave a bonus of four to each dice, compared to only plus one for each rifleman, the casualties were still equal, two on each side. And it was the cavalry morale which broke first in the melee. They scattered.

At this point, having seen both regular cavalry units broken the American commander withdrew with his still intact NG cavalry. Losses were four Americans, to three Canadians. The rules clearly showed the possibility of cavalry withstanding the fire of formed up battalions is slight. The American commander was later reprimanded for recklessness, having not taken a sufficient force, or supporting infantry. His resignation was accepted.

After the loss of Ottawa, and Toronto still besieged, this action has been well received in Montreal, where a large force of Empire troops are planning to take the offensive. The game was played in twenty minutes, and was fun. 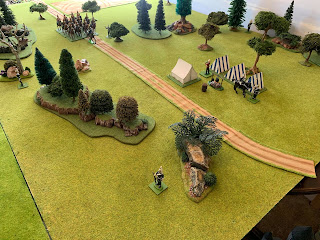 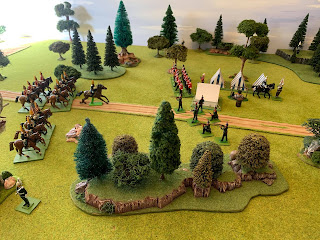 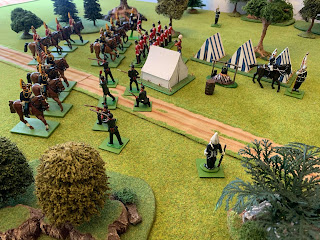 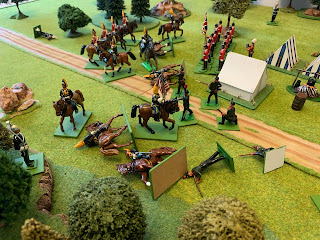 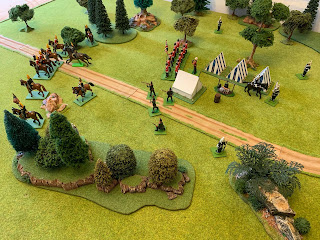 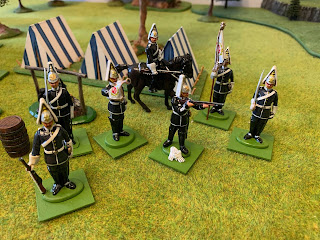