Having just completed the Pepperrell Light Infantry (aka Prescott's Light Guards), a Massachusetts militia unit, I decided it was time to clear the table and have a skirmish game.

SCENARIO (All determined by Dice)

With Toronto under siege, American Command ordered a small force to take and secure the nearby settlement of Owen Sound. The Americans were allowed two dice x 3. The settlement was allowed one dice x 3. (Three is important in my house rules as it is a potential firing unit.)

The American force comprised the commander, a troop of light cavalry (4), a national guard company (4), and a band of volunteers (aka plunderers, 4). They arrived on the outskirts of the settlement at about 10pm, they then rested with the intension of a surprise dawn attack.

The settlement had fortified a building to serve as an armoury. They numbered a company of volunteer-militia (4), others manning a gatling gun (2), some armed residents in local houses (6), all commanded by the town mayor/captain. Only the gatling gun was kept operational at all times.

With the rising of the sun the Americans silently approached the settlement at double time. They successfully reached the stockade (three moves) before being spotted. The gatling opened up and took down a raider, but in the exchange both crew members were casualties. At this point the barracks were to arms, and some civilians were taking shots at the cavalry troop which had secured a key junction in the town.

In the stockade both sides had the advantage of hard cover but it was the Americans that inflicted a casualty. With half their number down, the Canadians took a morale check, they held. In the following exchanges another Canadian was hit, and no longer able to return fire the garrison surrendered. The firing from nearby houses had inflicted no casualties and when word reached them that the garrison had surrendered, the armed civilians did likewise.

CASUALTIES, one US National Guardsman, four Canadian Volunteer-Militia. Game lasted about 15 minutes, and a bit of fun. 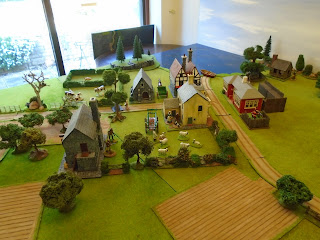 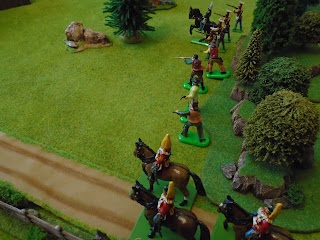 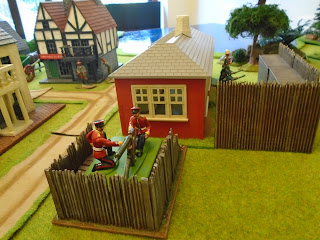 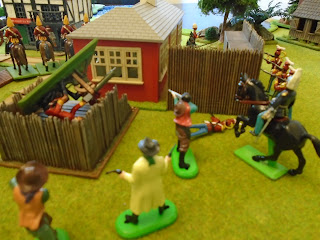 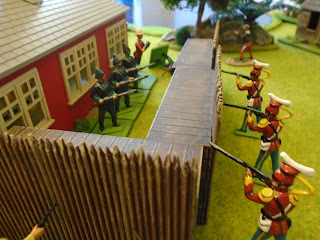 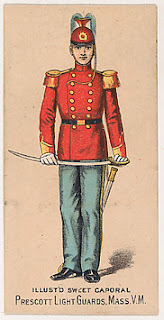 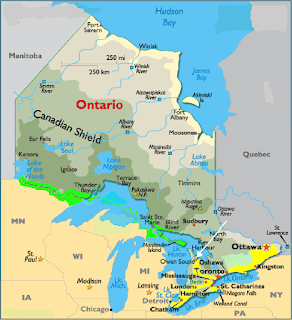