Further research, with help from Hugh's SMALL SCALE WORLDS, confirmed they are cadet cavalry, initially produced by Bergan/Beton but subsequently copied by numerous other manufacturers, including Airfix. These probably date back to the 1960-70s.

Well, I like my toy soldiers to look tidy, and as I was suspicious of the originality of the paintwork, decided to add additional detail and colours to bring out the best in the riders. My plan is that the acrylic paints and coat of varnish will better protect them. Also repaired three horses reins with milliput and several coats of superglue. Unfortunately, out of the twelve riders three had serious decay, they were also another make. Three horses were also different including some rather flat Tudor-Rose. They added nothing to the other nine cavalry.

Supplementing the previous paintwork of green, white, and flesh, they have now been revamped for my wargames table. All are strong and cheerful. As they aren't meant to be historical, I've given them a bold 'toy look'. My plan is to use these mounted figures as top-up cavalry for odd armies and imaginary scenarios.

(Footnote, the three decaying figures have been cleaned up. The heads are beyond saving and will be replaced. Hope to find an interesting use for these figures.) 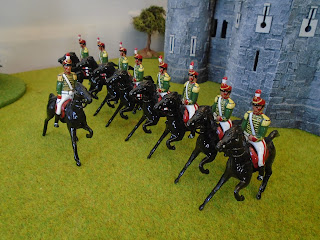 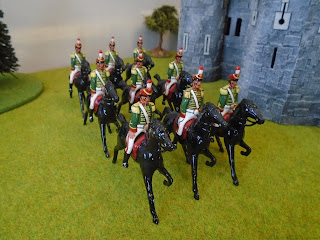 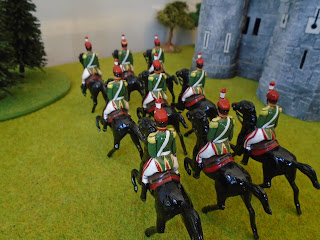 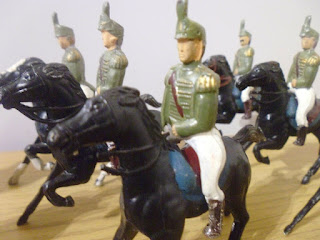 Email ThisBlogThis!Share to TwitterShare to FacebookShare to Pinterest
Labels: Cadets