After the capture of Louisiana, the French found themselves bottled up in the city, with several American armies encamped to the north, opposing all further movements. In December the French received reinforcements and decided this was an opportunity to secure further territory. It appears both sides were keen to engage in something more than a skirmish.

Overview of the battlefield 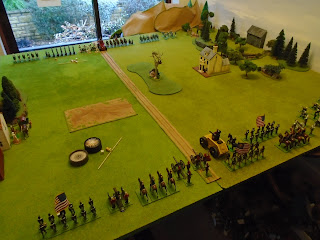 MOVE 1.The armies approach each other. 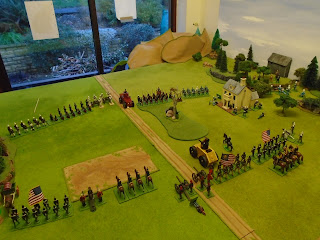 MOVE 2, the armoured cars and artillery came into range of each other, the US having some success on the French AC. MOVE 3 saw light troops engage in a melee inside the yellow house. MOVE 4 Artillery fire dominated this move. MOVE 5 US score a D6 on the French AC, followed by another D6, and then a D5 this equated to the destruction of the turret. But the French artillery had pounded the US battery, and they were silenced. However, the French Zouaves fled the yellow house, it was now under US control. MOVE 6 a battalion of French marines advanced and opened fire on the yellow house. 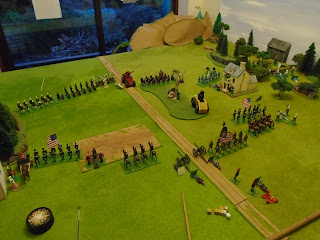 MOVE 7 and 8, the US armoured car overran a French machine gun section, and its turret gun was also causing real problems. A neighbouring French battalion routed and was pursued by the US armoured car. The French artillery eliminated a cavalry unit. MOVE 9, the French commander sent word he was willing to retire, the US commander (D5) demanded a full surrender. This was not accepted. MOVE 10, on their THIRD attempt the French marines charged the house, some Americans were captured. MOVE 11, at this point something unforeseen occurred, the loss of the house obliged a morale check on a nearby US battalion, they scored a D1 and routed!. MOVE 12, the US commander sent word he was willing to allow the French to retire, the French commander now declined his offer. It was finally agreed that both sides should retire, it was a draw. (NB. From a campaign point of view this will be considered an American victory as the French remain bottled up in the city of Louisiana, and had also suffered heavier casualties.) 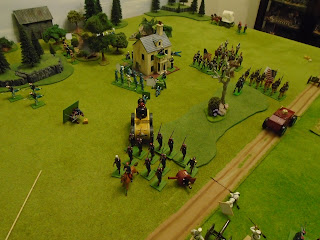 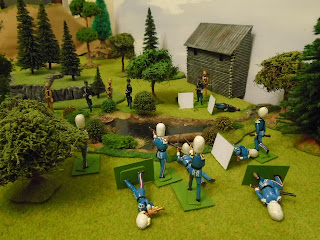 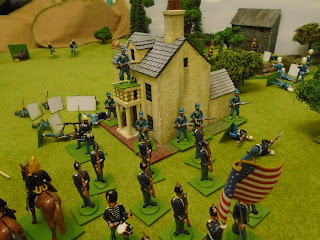 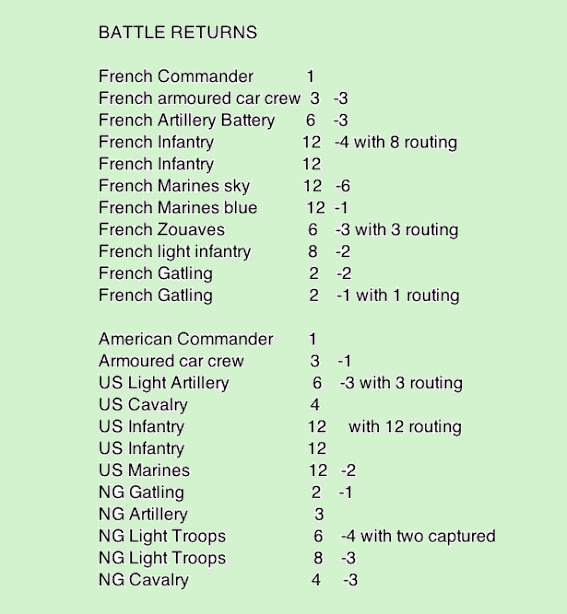