No sooner had the United States army arrived in the vicinity of Montreal than it became increasingly clear it was, for all practical purposes, impossible to besiege. Too many outlets were available for supplies to continue to reach the garrison. Worse still, reports were arriving (D4) that the Empire garrison in Quebec might be on the move, using the extensive 1885 rail network. This left only two options. ONE. To establish a permanent American headquarters at Longueuil. TWO. To launch a full scale assault on the city of Montreal. The advantage to the second option being, they could always revert to option ONE, and there was plenty of time to secure Longueuil for the winter. Having sent American brigades to key locations, counter-orders were now dispatched calling in most of these lesser positions. Empire commanders in Montreal looked on in some disarray, thinking (D1) all this had been carefully and correctly enacted by the Americans. This led to the Empire forces keeping some of their troops in unnecessary locations, fearful of an attack from some unexpected quarter. 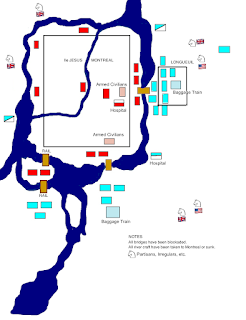 QUEBEC
A Royal Navy fleet recently docked at Quebec. Onboard were several high-ranking staff officers from London. It was also noted, a merchant vessel arrived with the fleet. You might say, peculiarly protected by the fleet? It rapidly unloaded a quantity of large wooden crates. Admiral Watson and General Kitchener can be seen here in conversation, one was overheard to remark "the Empire strikes Back". 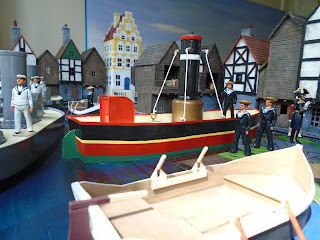 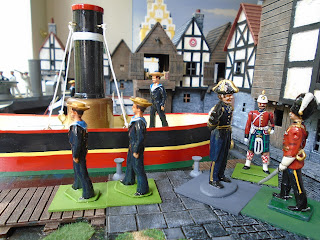 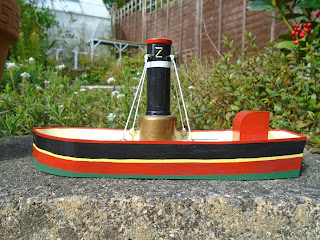 SUDBURY, ONTARIO
The recent raid on Sudbury (see wargame report), in which two buildings were burnt, has caused an interesting development. The local garrison had an influx of new recruits. Local miners are demanding to be trained and issued arms and accoutrements. Fifteen (D5 x firing sections) have enlisted as volunteer-militia, and another nine (D3) have formed a local defence association.
NORTHWEST TERRITORIES
Isolated communities throughout this region are forming 'Rocky Mountain Rangers'. These are independent troops of light horse, willing to augment the Northwest Mounted Police in countering border raids. Supplied with Empire weapons, ammunition and accoutrements, they appear to be quite determined characters, and fervently loyal to the unity of the Empire. 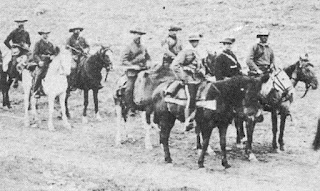 (Not fictional, actually existed, the RMR were recruited in 1885 by Major John Stewart. Served for one year, each member got $80 and 320 acres of land as a reward.)
BRITISH COLUMBIA and WASHINGTON STATE
In January, Empire forces had occupied Seattle, but their stay was very brief. The capture of this city was strategically a big mistake. It just stimulated the entire American west coast into action. Shortly after its capture, eight military units arrived by train in Portland, Oregon, sent by California. When Empire Command in Victoria, B.C., was informed of their arrival, all Empire troops were ordered to hastily retire to British Columbia, vacating several posts on the Columbia estuary and also Seattle. Later, six United States military units re-entered Seattle, and, as feared, another five crossed over the border and encamped to the south of Vancouver. The latter arrival, however, was considered more embarrassing for the Empire than threatening, as the Vancouver garrison also mustered five units, was well fortified, and could rely on naval support. But what a change in fortune!
DIPLOMACY
The Swiss ambassador recently requested an audience with the British Prime Minister. He apparently indicated that he was aware that the United States Government was not hostile to finding an acceptable conclusion to the unfortunate misunderstandings that have occurred between the United States and the British Empire. The PM apparently replied that he too was aggrieved that it had occurred, but the chief wrong had been committed against an integral part of the British Empire, that the loss in life and property of Her Majesty's subjects had been of a peculiarly disagreeable nature to Her Majesty, that all redress lies in the actions of others. The PM also mentioned that the present conflict between the United States and with France and Spain must also be of concern to the American President, in addition to our own misunderstandings. They parted.
AMERICAN SHIP BUILDING
The raw materials of the United States are enormous, and it is now being directed towards New York and the Chesapeake Bay area, where the shipbuilding industry is alive and well.
THE WAR IN THE SOUTH
The recent disastrous defeat suffered by the main French army in Louisiana has forced them to reconsider their options in this war. By gathering up the survivors, and reducing their posts, they have been able to form a new army to hold New Orleans, but they need some 'good news', and a new strategy.
The Spanish in Florida are also concerned. The Americans are gathering again on the Georgia-Florida border, and look as if they intend to have another go on taking St.Augustine. The Spanish and French commanders are known to be in communication, discussing future cooperation.
MAP OF NORTH AMERICA, MAY 1st 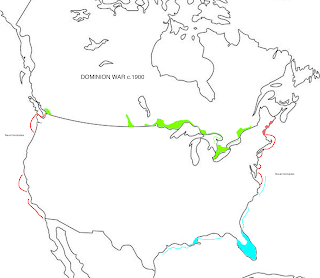 MY ARMOURED TRAIN, painted and ready
The first 'working' steam engine to serve on rails was constructed by the Cornishman Richard Trevithick in 1804. It pulled five loaded wagons and seventy ironworkers.  The first public railway was the creation of Englishman George Stephenson in 1825, it also utilised a track gauge still used by all trains, worldwide. Here is my armoured train, painted and ready for service, and working with complete reliability! 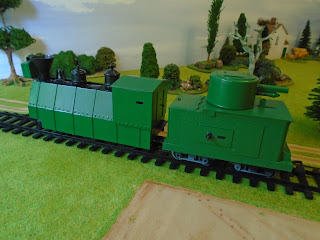 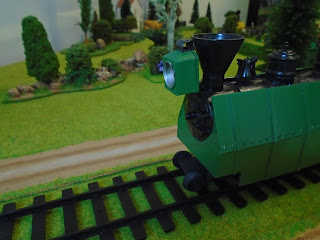 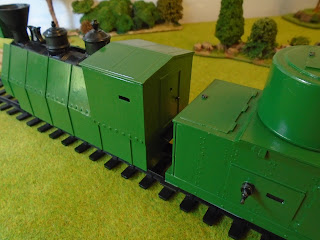