A GENEROUS GIFT FROM A FRIEND

Today a box arrived from someone who has played no small part in fostering my interest in collecting traditional toy soldiers. I initially started a renewed interest in 54mm in 2018, the plan being to convert old plastic toy soldiers, some of which I possessed in my childhood during the late 1960-70s. Suddenly, out of the blue, a box of lead Highlanders arrived from Paul Watson, inviting me to have a go at repairing them for the wargames table. Recently, I mentioned an intention to raise a naval contingent, but it was proving a bit difficult. Out of the blue, Paul sends a box of figures that are surplus to his requirements having now completed his own collection, his only interest being a wish to see them restored. I hope I'm not out of order if I mention that Paul has gone through a bad spell of ill health, and has not yet fully recovered. I know many will want to join me in wishing him a full recovery.

Well, here they are. I will start with a general paint stripping, having made a record of the original paintwork, then comes the pleasurable part of deciding how they will be utilised, what figures can be mixed, etc,.  Must admit, I don't recognise some of these castings, the bottom row are solid lead, possibly new figures?

(Paul, hope you don't mind if I send something in return.) 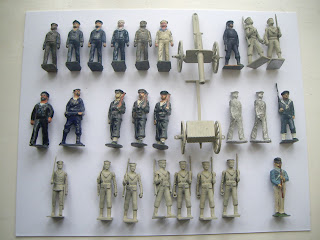