In this wargame dice are thrown each move to determine which side fires first, and this was an important feature to the game.

SCENARIO East African Forces have secured a small town, and also an outpost to the NW. They are expecting an attack but are not aware from which direction(s). All deployments must remain in their positions until the sixth move, but supporting fire is allowed. However, no fire may take place until the insurgent forces fire first, or come into view (12"). For the Insurgent forces, they are obliged to dice their unit deployments.

MOVE ONE The attack commenced from the NW when one insurgent group, supported by a technical and HMG, approached the fortified outpost/property. An insurgent artillery piece to the North was also able to give valuable support. The exchange of fire saw the technical driver taken out but casualties were fairly even. In MOVE TWO a well positioned tank, between the town and outpost, opened fire. A direct hit on the technical, gone! However, those in the outpost suffered several casualties and decided to retire. From then on the tank and Insurgent gun exchanged fire. The outpost was occupied in MOVE FIVE. In MOVE SIX the tank took out the artillery piece, and some military police arrived to support those forced out of their position.

MOVE SEVEN saw the general attack on the town by four insurgent groups, mainly coming from the SE. But they were in for a shock. The East African Forces opened up with a field gun, mortar, HMG, LMG, and small arms fire. Six casualties, before they had fired a shot. However, It was now the Insurgent's turn to return fire, and RPGs began to have an impact. One taking out the field gun.

In MOVE EIGHT a RPG fired from the outpost roof scored a six (hit), followed by another six (magazine) which took out the tank between the town and outpost. But it didn't stop there, another RPG (the insurgents had five) hit the other tank with a six, followed by another six....... my mouth opened! Their small arms fire had also been quite effective. Now under attack from three directions, in MOVE NINE a general retreat was ordered in the direction of the SW........ and it wasn't quite orderly. Losses EAF 18, Insurgents 17. 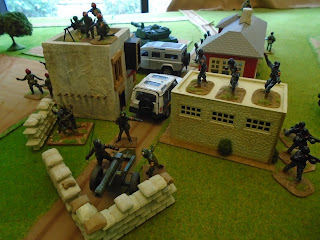 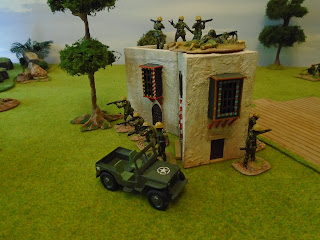 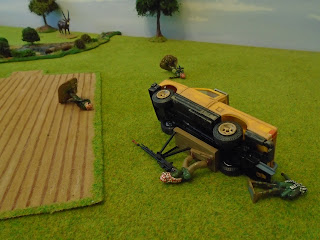 Insurgent groups on the SE slowly approach the town. 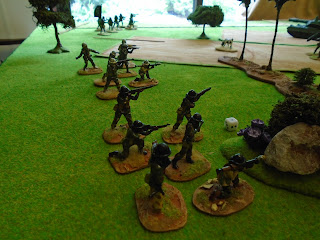 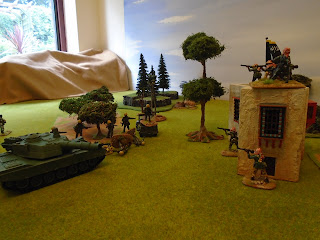 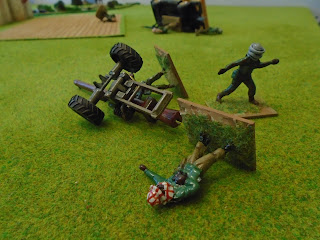 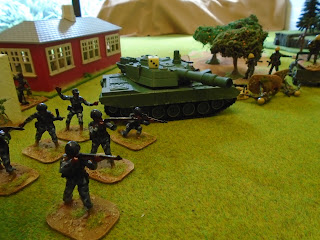 The main attack on the town. 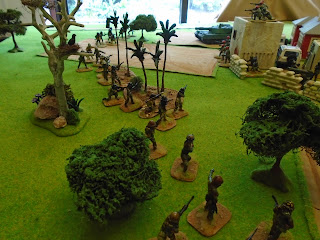 Moving out to engage the main force of insurgents was probably a mistake. 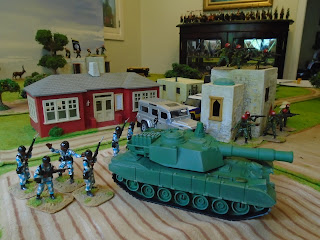 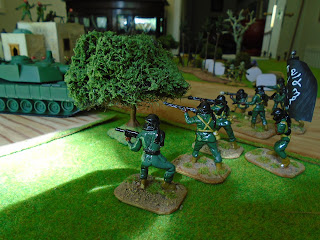 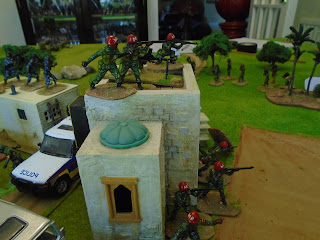 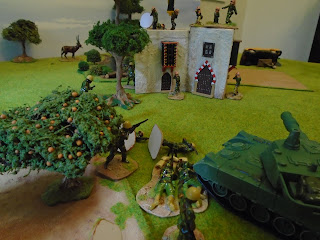 We are pulling out! 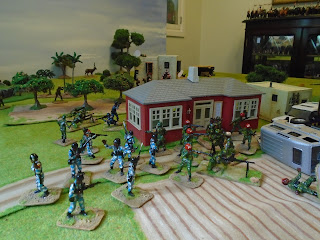 SOME THOUGHTS
They should have been able to hold the town and outpost, but its still a game involving dice. Perhaps the restrictions on the garrison were too limiting for the tanks, unable to utilise their advantages in range? It was also interesting to see the EAF small arms become quite ineffective while withdrawing, the buildings and rushed withdrawal impeded 3-man firing sections finding viable targets. Although still obeying orders, the garrison had to retire as quickly as possible or their losses would have risen sharply. 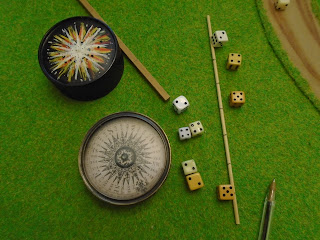