Its been some time since I've fielded my Medieval collection, and its the first time they have been used in a solo-game. To be honest, I quite prefer solo wargaming, no entertaining, the freedom to decide when to start, take a break, leave for another day, or conclude a game. It all works well with my primary concern: seeing my collection well used, and photographed. And with simple rules, its easier to prohibit gamesmanship disregarding historical conditions and methods. Both sides number approximately 140 figures, and their weaponry is also evenly matched. It was never planned that way, the collection just appeared, it was always the heraldry that caught my attention, the one exception being two opposing units of twelve mounted knights.

BACKGROUND For those unfamiliar with the conflict, Medieval Italy was a patchwork of small states. When a disagreement arose between the Papacy, and the Holy Roman (German) Emperor, the numerous governments declared their support for one or the other. For the record, neither was more inclined towards Italian independence, personal liberty, Christianity, or Italian nationalism. Both sides included warlords, aristocrats, clergy, communes, republics, money lenders, and mercenaries. The concept of nationality, as had already become evident in the British home nations, and later in France (with Joan d'Arc) existed only at a city level, if at all. And lets not forget, many of the city states had 'parties' or factions that would happily embrace the Pope or Emperor if they thought it would help them gain power! Concerning foreign participation, usually France backed the Pope, often using Swiss pikemen. While the Emperor used German mercenaries, later styled Landsknechts. The Spanish later sought control of the Two Sicilies, and were slightly Ghibelline. Strangely, both the English and Scots nations had sympathies with the Guelphs.

THE GAME Both sides advanced with resolution. Historically, they should have formed up into three 'battles' or divisions. But as the armies clashed while on the move, we can let this pass. On MOVE THREE many of the shooting formations deployed as skirmishers. On MOVE FOUR the shooting commenced, and the dice favoured the Pope, inflicting nine casualties for the loss of four. 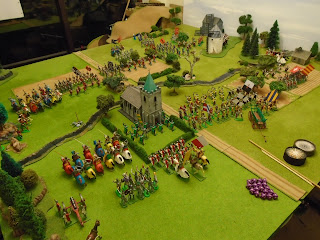 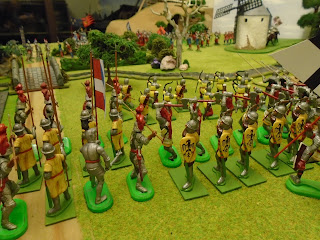 MOVE FOUR, casualties due to bow and shot. 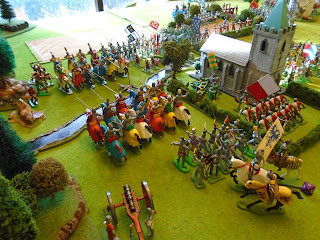 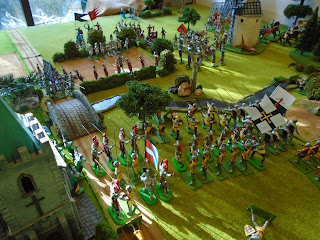 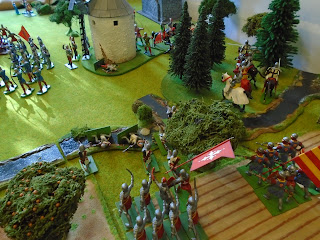 MOVE FIVE, the heavy cavalry charged their opposite number. In the following melee the Ghibellines suffered two casualties to only one on the Guelphs. Shock, having lost the melee, they were obliged to test their morale (D1) and routed! This obliged morale checks on neighbouring units within eight inches, that were of equal or lower rating. Three more units broke and ran. The dismounted knights, of equal rating, held fast, with the Emperor in attendance. 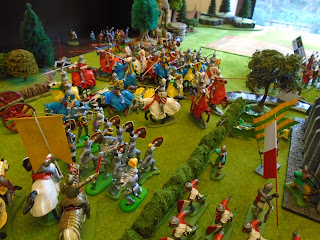 In the centre, the Ghibelline pike block broke their counterparts on the Bridge, but the panic never spread to neighbouring units 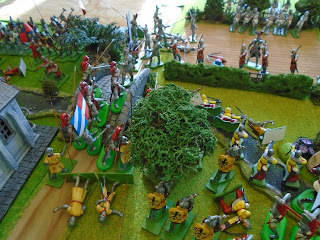 On the far right, the Papal lighter horse took on and scattered their counterparts. Casualties so far were Ghibellines 25, with a further 36 routing. Guelph losses were only eight, mainly pikemen. For the record, I probably have slightly more sympathy for the Ghibellines (I like their heraldry), but the dice determined the outcome, let no one claim I cheat on the dice! 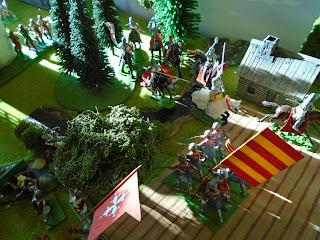 On MOVE SIX I really had lost all confidence that the Ghibellines could recover their position. I had already decided it was correct for the Emperor to move at all speed to the centre, and try to depart with part of his army. However, the Guelph cavalry now charged the dismounted knights guarding the Emperor. (Under my medieval rules, units wishing to declare a charge must test their morale first, the Guelph knights scored an eight, and charged. The dismounted had to now test their resolve to stand, they scored a D1, and also routed, with the Emperor. In the following melee the Guelph cavalry slaughtered three more. Concerning the Ghibelline centre and right wing, while they still had a fair force, their shooters had been reduced to eight, while the Guelphs could still muster near thirty. This game was over! I did calculate the Emperor would have been able to vacate the table before death or capture.
This was a quick and fun game, I really was expecting a twelve-move bash! 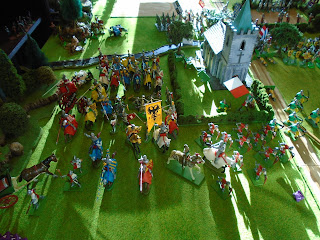 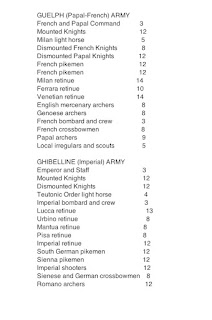