The Advance on Montreal (Wargame)

The Dominion War in Canada had largely gone quite during the winter. It now erupted into conflict when the US Army advanced two expeditions towards Montreal. The largest comprised ten military units, those formerly encamped near Ottawa. The other comprised seven military units, which formed the 2ND ARMY OF NEW YORK. The Empire intelligence service was fully aware of this, and Montreal had twelve military units at its disposal. Since the fall of Ottawa, this city had become the seat of government for the Dominion of Canada, its loss would have a disastrous effect throughout the Empire. But Empire Command had concluded that Montreal and suburbs could not be protected on all fronts if surrounded, so plans were prepared to establish two outer lines of defence. One guarded the western approach via St.Eugene (Township of East Hawkesbury), the other was to the east, based around the town of Granby.
THE GRANBY LINE had been assigned five Empire military units. Facing them was the 2nd Army of NY, comprising seven military units. The American objective was to smash through this defensive line, and to join up with the Main Army outside Montreal. 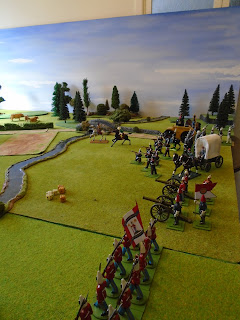 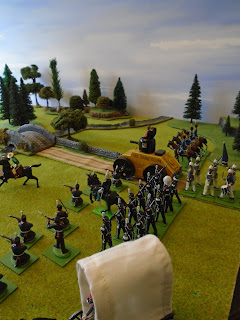 THE BATTLE
MOVE ONE commenced with a rapid advance by the Americans. The redoubt guns opened up and scored a hit on the Roving Cannon (aka RC), taking out a crew member. MOVE TWO saw the redoubt guns destroy a field gun, although the crew were uninjured. So far, the redoubt only had one very slightly injured (saving throw), so it was looking good for the Canadians. MOVE THREE, not so good. A gunner is hit, and the RC gun takes out a Canadian Rifleman. MOVE FOUR, the RC suffers another hit on its crew. MOVE FIVE has the RC gaining its revenge on the redoubt.
MOVE SIX, the RC moves into melee with the Canadian Highlanders. Suffering one casualty, the Highlanders break and run. Fortunately, further damage ceased as a redoubt gun silenced the last RC crew member. But they had lost an entire battalion, unable to be rallied in time.
MOVE SEVEN saw an excellent charge by the NY Hussars. In the subsequent melee they were neutralised but not broken, and not before they had scattered the Canadian Fusilier battalion! This move also saw hand to hand fighting over the redoubt. The gunners fought like lions, breaking two battalions before their own resolve gave out on reaching half strength.
MOVE EIGHT-TEN involved heavy fighting over a fortified house, several rounds of melee, until the attacking American unit eventually broke. By now, it appeared  the Americans only needed to move up their unemployed artillery crews and realign a captured redoubt gun onto the nearby houses, and pound them into submission. The Canadians withdrew. (An alternative view is that the two Canadian battalions could have attacked the redoubt, from two sides...., but the Canadians did not know how much damage they had inflicted, but were aware that the central redoubt had been taken, and three allied units had routed. 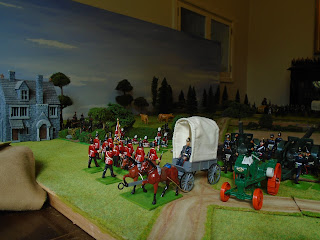 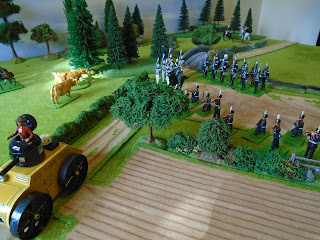 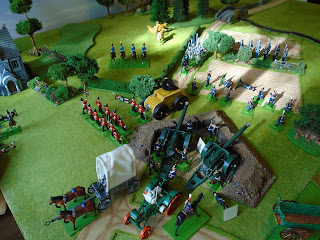 RESULT
Despite the Americans taking the key redoubt, their army was broken. Only one battalion, and the artillery battery were still operational! Five other military units were knocked out. The Canadians still had two working battalions, and two more would likely rally elsewhere. A tractor had even saved one of the siege guns. Officially, this was an American victory, but there would be no advancing on Montreal (confirmed by a D3). 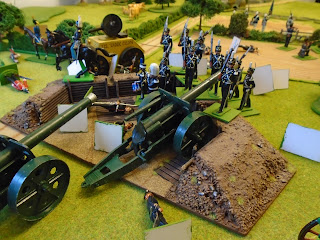 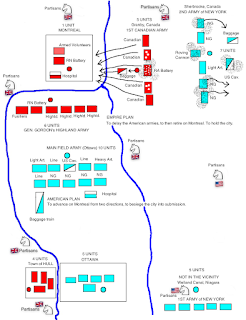